Buckwheat despite the name is actually nothing to do with wheat. Buckwheat is a seed, however it is often called a pseudograin as it can be used in place of grains. The plant that produces the buckwheat seed is related to rhubarb and sorrel. It’s cheap (price as of April 2016 is about £3 per kilo for organic), quick and easy to prepare with a mild nutty taste that is very versatile. Buckwheat can be used as a whole seed or is easy to grind down to a flour for baking and other recipes. It’s a staple in my house to make quick, filling and nutritional meals. 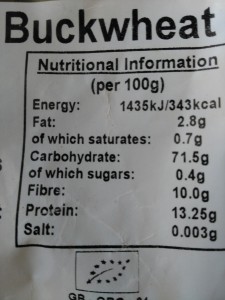 Buckwheat is high in protein with 13% and contains B vitamins, magnesium, iron, manganese and copper. Buckwheat is suitable for people with celiac disease and anyone that has gluten sensitivity. Buckwheat being a seed is much easier for your body to digest and avoids some of the problems with grains such as bloating.

How to use Buckwheat

You can buy many products such as pasta, noodles, crackers and bread that consist mainly of buckwheat and are naturally gluten free. These are often nutritionally superior to their grain containing counterparts and cook just as quickly. Buckwheat noodles are one of my favorite foods and I love the springy flavor sponges they become. You do have to take more care when cooking buckwheat foods such as noodles as they can easily loose their shape and stick together as they don’t contain gluten to glue them together. What I do is cook and stir frequently, then as soon as they are cooked I drain and toss under cold water to stop them cooking and sticking together. It may sound difficult but its easy once you get the hang.

1 thought on “Buckwheat – Benefits and How to Use”