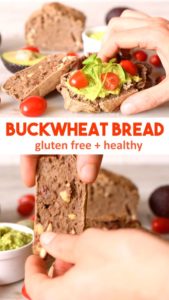 Gluten-free bread is quick and easy to make with this sprouted buckwheat almond bread. Made with just three ingredients and water. No leavening, agents or flour are used in this grain and gluten free bread recipe – it’s just nuts and seeds! Inexpensive healthy bread as it’s mostly whole buckwheat.

Buckwheat despite the name is nothing to do with wheat and is a gluten-free seed. The buckwheat and almonds are activated to make the bread more digestible suitable for many people who have digestive issues with normal bread.

If you have IBS or leaky gut and are looking for a bread replacement do try this buckwheat bread recipe as many with these issues love this bread and it loves them back. If you have serious digestive issues please do consult a professional and follow their advice.

Play on YouTube, View the no music video recipe.

Gluten-free bread is often known as expensive, difficult to make and dry. This gluten free bread recipe is none of those and really easy to make. It has a great texture that isn’t dry at all. No leaving agents are used and nothing gluey is used to replace the gluten.

I recommend slicing the bread as soon as it’s taken out the oven. This is to help it cool quicker and to stop the residual heat from cooking the loaf. It’s great toasted and topped with slices of my Smoked Cashew Cheese.

The buckwheat and almonds are sprouted in this buckwheat bread meaning they’re much more digestible.  It’s suitable for a paleo diet according to several experts as the phytic acid is reduced during the sprouting. Buckwheat is a seed but it’s used like a grain and also known as a pseudo-grain.

Buckwheat does go a bit slimy when soaking, not pleasant to see but it reinforces how important it is to soak it. After soaking use a sieve to give a thorough rinse so all the goodness in buckwheat bread can be absorbed.

I buy my buckwheat in big 5 kilo sacks so it’s very inexpensive. I use the whole buckwheat seed rather than flour so that you’re able to sprout it and save money.

Always use raw untoasted buckwheat for this recipe as once it’s toasted it will not sprout.

Think of this buckwheat bread as a base recipe to add any ingredients that you like to flavour it. I personally like it with some onion and sundried tomato, like in my sundried tomato quinoa muffins.

I use whole almonds still in their skins for this bread as I like the texture and earthy taste. You can use pre-flaked or blanched almonds if you prefer. Try to use European almonds as they are often the highest quality and usually not treated unlike Californian almonds.

To make this recipe even cheaper just use buckwheat and chia for a two-ingredient healthy gluten free bread. It will be loaded with protein and very inexpensive. The almonds add some texture and taste but are not important for making this bread turn out well.

If you like this recipe check out my buckwheat waffles.  A perfect filling healthy breakfast with dark chocolate and fresh berries.

Buckwheat is nothing to do with wheat – the only thing it shares is the name. It’s a seed and contains no gluten.

Whole buckwheat can be boiled and cooked like other grains.

It’s known as a Pseudo-Grain as it botanically isn’t a grain, but it is used like one.