Is this food healthy? This is a question that crosses many peoples mind when shopping. You can’t just rely on the ingredients in the packet as many contain harmful ingredients like microplastics that aren’t listed.

Our lifestyles are polluting the worlds water supplies and this is feeding back into the food chain. With sharing this knowledge we can make choices to reduce the amount of plastic we eat and put pressure on changing things for the better.

While there is limited research as to what the long-term effect of ingesting plastic is, it’s highly unlikely to be good news as limited lab results have shown negative impacts on health.

Here is a list of common everyday foods that contain plastic:

Did you know that as of 2018 over 95% of tea bags contain plastic? Plastic is used in the sealing for most tea bags.

If a teabag has a crimped edge or seal it will contain plastic. Manufacturers claim it’s just a small amount but this makes teabags undesirable to compost as they will leave behind microplastics and a brew can contain microplastics.

Avoid microplastics in tea by either using loose tea leaves or by choosing a brand that has folded edges and is sealed with a string and or staple.

Most cans in 2018 are lined with BPA, the plastic chemical that has been linked to cancer, obesity and other serious health conditions. This plastic leaches into the contents of the food and is a source of microplastics in the average person’s diet.

The worst food in cans is acidic produce like tomatoes as the high PH value increases the number of plastics and chemicals leached into the food. Instead of buying tined tomatoes try getting tomatoes or passata in jars. Tinned tomatoes are handy but I’ve stopped buying them due to the serious effects of BPA.

A pressure cooker is a worthwhile investment to cook your own fresh pulses and beans from dried. If you cook them at home you can change the water; making them less gassy. Freeze in batches so they are just as handy as tins. This also cuts down on the environmental cost of creating and transporting heavy tins. 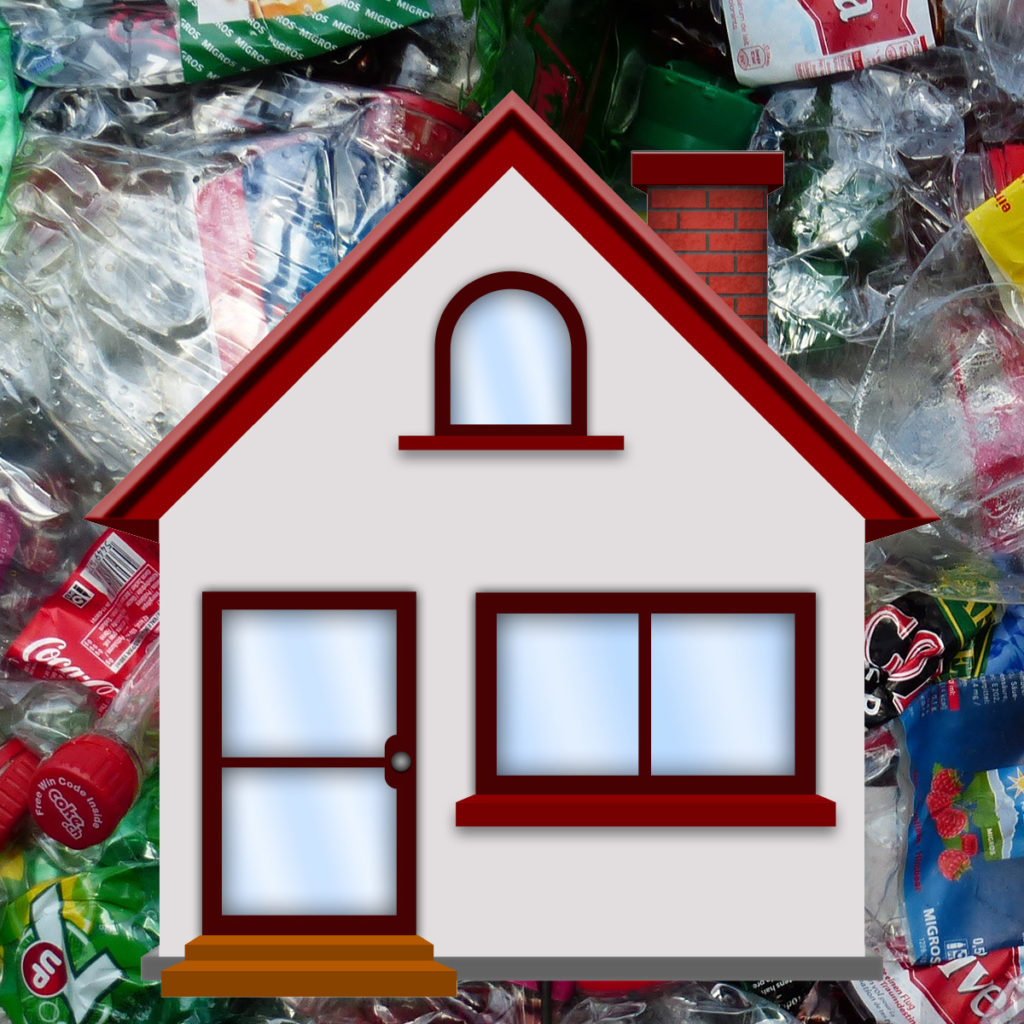 Floating in Your Home

Lots of the dust in your home could be plastic floating around that has come from clothes, furnishings and industrial processes. Microplastics can be airborne and are often floating around homes. This easily ends up landing on food and is another significant source of plastic we are eating.

Avoid microplastic in your home by only wearing natural fibres, air your house regularly (if away from factories in a clean area) and clean often. If you are bad at cleaning it might be worthwhile getting a robotic hoover. Modern robo vacs are good at cleaning everywhere and get into corners.

A plastic bottle sat in direct sunlight will deposit even more microplastics. Tests have shown that bottled water has twice the amount of microplastic fibres in it compared with tap water – up to 10’000 plastic pieces per litre.

If you have to buy bottled water try to get a brand that is bottled in glass. Although even with a glass water bottle that there might be plastic in the lid, but it will be significantly less compared to a plastic bottle.

Never reuse a single use plastic bottle as they are unstable and will leach even more plastic into your water. Invest in a good quality glass or metal bottle that will last for many years.

Try to have filtered tap water (if it’s safe where you are) or harvest water from a spring if you can.

Most ready meals are served in plastic packaging as of 2018. This potentially leaches microplastics both into the food during manufacturing and when the plastic containers are microwaved/oven baked.

If you have to have ready meals then try to get ones in cardboard (some manufacturers are moving away from plastic) and heat in a glass or ceramic container. Some cardboard containers could still be lined in plastic.

Most take away cups contain plastic in the lid and a layer of polyethene. This can leach into the beverage and will break down into fragments of microplastic when disposed of. Use your own takeaway cup made from a compostable material like bamboo.

Juice containers and plastic soup containers also leach microplastic into the contents. Another reason why it’s better to make your own. All of the Nest and Glow Recipes are healthy and easy to do, many have a prep time of less than 10 minutes. 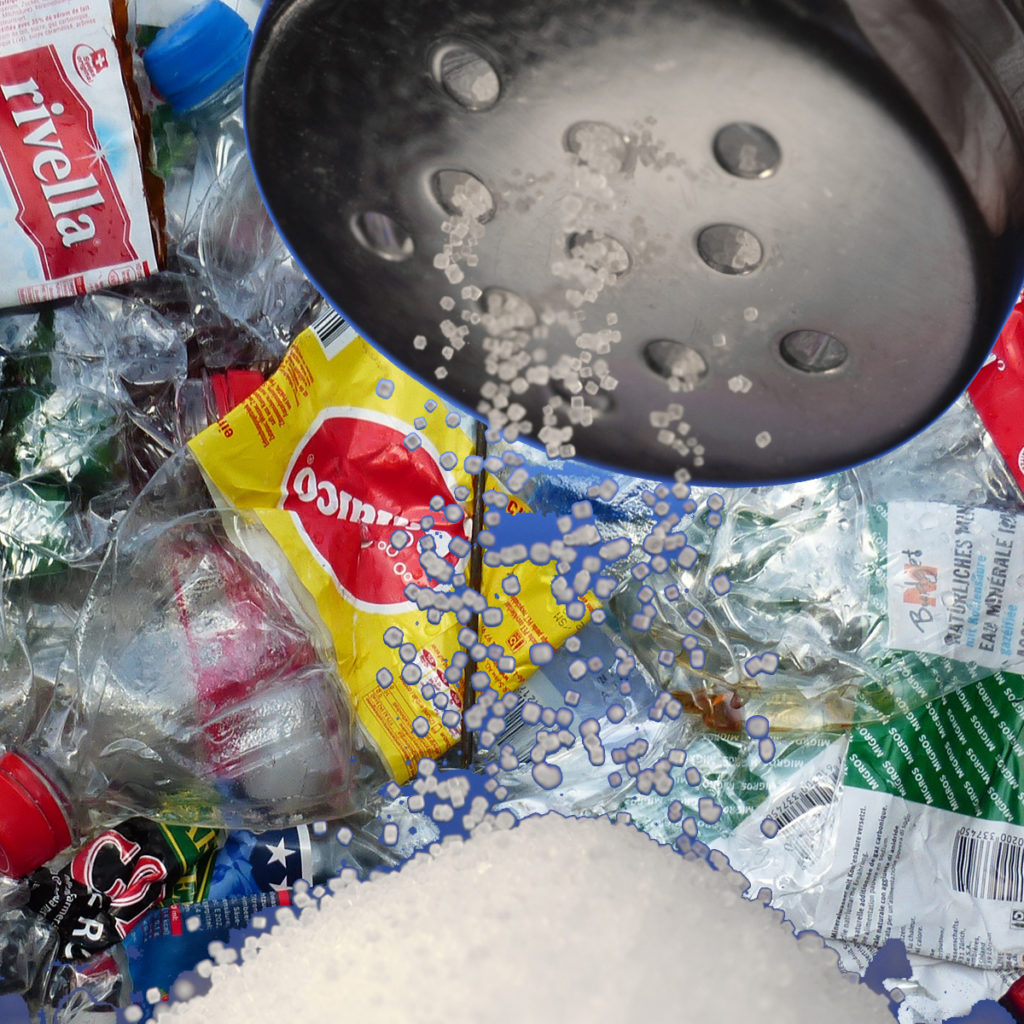 As seas are gradually getting polluted with microplastics it’s no surprise that sea salt is often contaminated. Studies have shown that 1KG of sea salt can contain over 600 microplastics.

Even normal table salt contains microplastics as a recent study showed that 36 of the 39 brands tested contained microplastics. However, the amount did vary significantly with salts in Asia and in particular Indonesia being significantly higher in plastic fibres. Indonesia has some of the worst water plastic pollution levels in the world.

There have been several studies on US beer and German beer that both found microplastics in the final beverage. The source of these microplastics is attributed to the water supply as they used municipal water and had similar amounts in a pint of beer as you would expect in a pint of tap water.

To avoid this try to find a beer that is brewed using either filtered water or a water supply that is known to be low in contaminants.

A study of 19 different types of honey from Europe and South America concluded that all contained plastic fibres. The amount of plastic in honey varied from 45 to 600 plastic particulates per 1 KG.

As Nest and Glow is a vegan site I don’t recommend anyone has honey from an ethical view as bees are exploited in the process. Instead how about making your own date syrup to replace honey? It’s healthier as it contains all the fibre from the fruit.

The oceans now contain a significant amount of microplastics that are invisible to the human eye. This plastic has been found in just about all fish and seafood. Fish have been shown to mistake plastic for food and accidentally eat it.

Although lots of the microplastic in fish doesn’t get ingested, as the stomach and gut of fish isn’t eaten, there’re still traces throughout the whole animal. Eating fish and particular muscles is a big source of microplastics.

Nest and Glow is a plant-based site so if you are looking to eat less fish then check out all of my healthy and easy recipes.

What do you think about microplastics in the food supply? Have you any other foods to avoid exposure? Please discuss in the comments below.