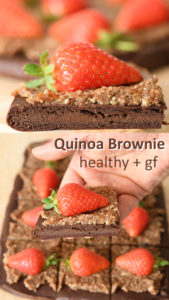 Healthy quinoa brownies that are high in protein with no sugar, flour, butter, gluten, eggs or oil. Just 4 whole food ingredients are used to make this easy quinoa brownie recipe. Much simpler and quicker to make than a cake but tastes amazing.

There’s more nutrition in a slice of this brownie than many people have in a whole day.

For this recipe I use normal dutched processed cocoa as it will be cooked. It’s cheaper than raw cacao and still very nutritious. More on the difference between cocoa and cacao.

You can use roast hazelnuts for the frosting if you prefer. For health reasons, I use raw hazelnuts as all the delicate healthy oils are still intact.

Any nut or seed can be used for the quinoa brownie topping. I chose hazelnuts as they go so well with chocolate. Walnuts, pecans or pumpkin seeds make a great replacement.

This healthy brownie recipe is sweetened just with raisins. However you can use dates or another dried fruit if you prefer. I like raisins as they’re inexpensive and tasty.

No syrups or refined sugar are used in this healthy recipe as it’s sweetened just with fruit. I know some people will say it’s still high in sugar, and while it is you’re also getting a lot of fibre and nutrition.

Eating cakes high in nutrition and fibre makes them more satisfying and filling so a slice or two is often enough. Normal cake is loaded with calories and refined ingredients making it very moreish and easy to overeat on.

You want to use white quinoa when making this cake. Red or black quinoa is much tougher and doesn’t give a great texture.

Whole quinoa is used so it can be sprouted and is easier for your body to absorb. Also it’s much cheaper than buying quinoa flour. Quinoa in the UK is rinsed so a quick soak and drain is enough to remove any bitter taste. But if your quinoa sometimes has a bitter taste you may want to drain and rinse several times. Quinoa is actually not a grain, it’s a seed that’s naturally gluten-free and contains all amino acids.

The most important step with making this cake is making sure the quinoa is fully ground. If bits remain they will have an unpleasant texture. You can hear from the sound of the blades when all of the quinoa is broken up.

A 600w bullet style blender is enough to make this quinoa brownie recipe. Although you may want to blend in three 1-minute batches.

I wasn’t sure if I should share this recipe, despite it being an easy one by the time I’ve written, photographed and created 5 different videos it still takes at least two days. However thanks for all the encouragement on social media to write this quinoa recipe brownie up. It’s not the most beautiful of healthy brownies but its the kind of recipe I love as it’s easy to make (not stressful like a cake can be), really healthy and a meal in one.

The strawberries on top initially I used for decoration but the flavour works so well they are recommended but kiwi or other berries would be a great alternative. Do only put cut fruit on top just before serving to keep really fresh.

I don’t use any oil for the pan and instead use greaseproof paper. This makes it easy to remove from the pan in one complete piece. As its a gluten free quinoa brownie you do need something like nonstick paper as it’s much denser than normal cakes or brownies. Silicone pans can be used but on my tabletop oven they often don’t last long and leach something so I’ve stopped using them.

As this healthy brownie is gluten free it’s very soft when it’s still warm and just out of the oven. Do leave it to cool for 10 minutes and it will then become firm.

I love that this quinoa chocolate brownie doesn’t contain any leavening agents. I’ve heard that some contain metals like aluminium and to be honest, it makes little difference to the end result and lots have reactions with them I’m so very happy to just leave it out.

Think of this recipe as a base recipe, I often add twists or extras but the main four ingredients of quinoa, cocoa, dried fruit/raisins and nuts/seeds. Add spice like cinnamon or cayenne pepper or whatever you have available and like. Do let me know in the comments how you’ve adapted this recipe.

The quinoa brownie does freeze very well. Just remember to cut before freezing so you can defrost and enjoy a slice at a time.

As this brownie is healthy and oil free it is best had on the day it’s baked. While it’s still lovley the next day no added fats does mean it gets a bit tougher.

Let me know what you think of this quinoa brownie in the comments below. Did you know chocolate brownie was first documented in 1896 as a name for a cake high in molasses?