Almond milk isn’t worse for sustainability than cows milk. There have been a few viral articles getting a lot of attention that berate almond milk for being very unsustainable and as bad as cows milk for the environment. However, the research behind this is fundamentally flawed if you actually look at the details.

[blockquote author=”Almond Milk vs. Cow Milk Life Cycle Assessment”]Since there was no accessible data from almond milk manufacturers on the amount of almonds in a liter of milk, we used a homemade almond milk recipe. We found that in one cup of almond milk, 46 almonds are needed, which converts to 194.43 almonds per liter of almond milk.[/blockquote]

How Many Almonds in Almond Milk?

Most brands of almond milk comprise of between 1-2% almonds. This means there are about 15 almonds per 8 US cups (237ml) of almond milk. The research paper assumed 46 almonds are needed for 1 US cup of almond milk.

The flaw in the research shows their calculation is out by about 2400%.

80% of the world’s almonds are grown in California and this is where the big almond milk manufactures source their almonds from. However Californian almonds have a reputation as being low quality following several outbreaks of salmonella. There’s also concern over the use of fracking water for almond production. Following salmonella poisoning it’s been mandatory since 2008 for all Californian almonds to be pasteurised meaning there is no such thing as a raw Californian almond.

Due to California almonds often being low quality and always pasteurised the health-conscious consumer, who is the kind to make their own almond milk, is very likely to source almonds from Mediterranean regions where they are far more sustainable. In fact, I know several plant-based restaurants in the US and California that only use European almonds in their food. This isn’t terrible environmentally as its a relatively low carbon footprint to transport ambient food by boat. 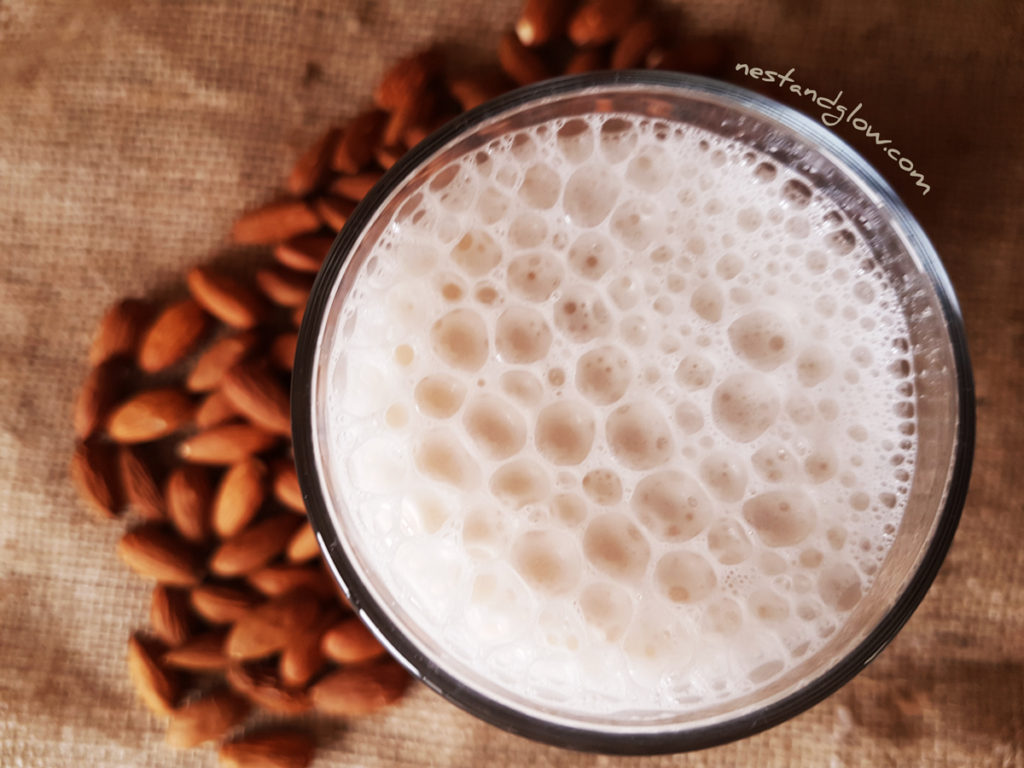 The almond milk for sale in the shops is very low in almonds and contains other additives and stabilisers. It’s little more than coloured water and is low in protein and heart-healthy fats.

Apart from anything, it’s expensive for the small amount of almonds and nutrition it contains. The unsweetened varieties I class as a neutral food that’s neither healthy nor unhealthy.

Not everyone following a dairy free diet is concerned about health and if you like almond milk then go for it. Although I recommend making your own almond milk as then the pulp can be used to make almond cheese.

There’s plenty of reasons why almond milk is undesirable; its low levels of almonds, the additives and the waste of transporting mainly water around. However when you compare it to cows milk it isn’t worse for the environment. For health reasons it’s better to make your own but there’s no need to feel guilty if you have some almond milk when this isn’t practical.

The research that was used to say how bad almond milk is for sustainability combined the high almond content of homemade almond milk with the high cost of transporting water. When these two factors do not coexist.

This article isn’t to promote shop bought almond milk, I personally always make my own and only have shop bought a handful of times. Hopefully this shows how flawed and inaccurate all the headlines are comparing the environmental impact of almond milk to cows milk.

What do you think about this? Please let me know in the comments below

22 thoughts on “The Truth about Almond Milk Sustainability”