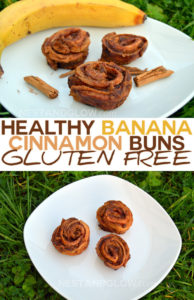 These easy to make cinnamon roll buns are just made of fruit and spices. I first had these at the Woodstock fruit festival where they made a raw banana cinnamon bun.

For this healthy cinnamon rolls recipe you can either bake in the oven or if you have a dehydrator make the raw version. The raw version does take 6 times longer to make.

They are a great high energy snack to have either before or after exercise. It’s best to make 8-10 of these at a time so you fill up the oven.

No flour or any grains are used in this recipe as the banana alone makes up the dough part. This means they are suitable for people following a gluten free, paleo and fruitarian diet. Of course they are plant based and vegan like all of our recipes.

All modern cinnamon comes from Vietnam and Indonesia. It’s been used for thousands of years and there’s history of cinnamon being imported to ancient Egypt in 2000 BC.