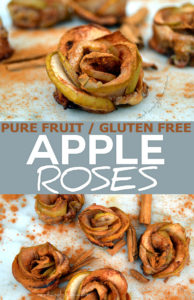 These apple roses are fun and easy to make. They are made of just fruit and a sprinkle of cinnamon.

No flour or gluten is needed as the bananas act as the glue for these so they are suitable for gluten-free, vegan, paleo and grain free diets.

They take about two hours fifteen in total to make, but most of that the oven is doing the work while you sit back.

I’ve been wanting to make apple roses for a while now, but all the recipes I’ve seen involve using shop bought pastry. So instead I created something that is dairy, flour / gluten and grain free. They are similar to the banana cinnamon buns but with slices of apple.

These apple roses would look more rose like with a red apple, but I only have green growing in my garden. I can’t bring myself to buy apples just for aesthetics when I have an abundant amount falling off a tree in the garden.

You can use a dehydrator to make a raw food version, and the apple becomes lovely and crisp, but this does take close to 16 hours to do.

Instead of simmering the apples leave them in the current / date juice and add some lemon juice and soak in a warm place for a few hours to soften.

Then place in the dehydrator for two 8 hour sessions instead of using the oven.