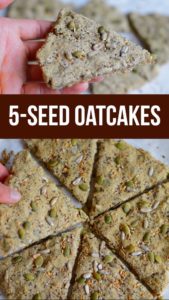 Healthy oatcakes recipe using no flour or oil with added seeds. These oatcakes are made with a mixture of five different seeds that add taste, crunch and nutrition. Oatcakes are so easy to make that you will wonder why you ever used to buy them!

This oatcake recipe is high in plant protein and fibre. It’s the perfect crunchy base for a savoury or sweet dip.

These oatcakes are made without any palm oil unlike most that are sold in the shops.

I usually make a somewhat round shape of dough to get triangular oatcakes. But any shape works well – lots of byte sized squares make for a handy on-the-go snack to keep in your bag.

Any hulled seed works well in this oatcake recipe so just use whatever seed you have in your store cupboard. I always try to add a bit of chia or flax as this helps to make a firm mixture that doesn’t stick to your hands.

Keep your seeds in the freezer especially once open as the air and light causes them to go rancid in a few weeks. Seeds or nuts last for months in the freezer.

Most commercial oatcakes have added oil and this is often palm. I wanted to make oatcakes that are free of any added oil. They taste even better than the shop bought ones due to being freshly baked.

Palm oil plantations are responsible for much of the destruction of the rainforest so I try to avoid buying it. Also the palm oil in most shop bought products isn’t healthy either. If it’s not good for you or the planet it’s a bit of a no-brainer to avoid palm oil where possible.

Its very difficult to buy oatcakes that are gluten-free, palm oil-free and wheat-free but easy to make your own. Freshly baked oatcakes taste much better than their shop bought counterparts.

These oatcake crackers are loaded with protein and fibre from the mixture of seeds and oats.

If you want to store these oatcakes for a few weeks I would recommend double baking. A 2nd bake after cutting will make sure they are dry enough to be stored. Because I like a simple life and food never lasts long in my house I bake just once.

You can add oil if you like to the oatcakes after adding the hot water. 1 tbsp of a heat stable high smoke point oil like rapeseed is enough to give a slightly crispier oatcake. I’ve made this recipe 3 times and found the oil doesn’t really make much difference to the end result so prefer to make these oil free.

Oatcakes were documented during the Roman conquest of Britain in AD 43 and most likely existed long before then.

They were most common in Scotland for thousands of years as people elsewhere turned their noses up at oats and considered them animal feed.

However in recent years, oatcakes have grown massively in popularity as people seak more nutritious foods.

These are the oatcakes that are in the marmite cashew cheese recipe.