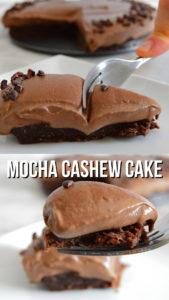 Easy recipe for a dairy-free and plant-based mocha chocolate cheesecake.

Cream cheese and eggs have been ditched in favour of heart-healthy cashew nuts and coconut butter. Making it high in good fats and plant protein

Try this nutrient dense dairy free cheesecake today! It tastes so good no one even notices it’s a vegan healthy cake.

I would also consider this cashew coffee cheesecake cake suitable for a raw vegan diet – but you will probably want to use a coffee substitute such as chicory.

A small amount of cooked ingredients like coconut sugar or maple syrup is usually acceptable on a raw food diet.

If you watch the video recipe you will notice the cake wasn’t quite set when I took it out. Ideally, it should have had a few more hours in the fridge but I wanted to finish the filming.

The next day it was set enough to stand up on its own.

If you want a really set cheesecake then add more coconut butter, but this makes it quite heavy so I prefer it as the original recipe.

The coconut sugar can be substituted for any other sweetener that you prefer like date syrup.

I like coconut sugar as it has a rich caramel flavour and for a mocha coffee cheesecake, it doesn’t matter that it turns the cashew mixture brown for this cake.

I don’t soak cashew nuts but if you are using a blender that isn’t powerful then it would be best to soak them first. Unlike almonds that need soaking, there isn’t a health benefit to soaking cashew nuts.

You can make a totally caffeine-free mocha carob chicory cake. To do this replace the espresso with chicory and the cacao with carob. If you are feeling adventurous you can make coffee out of dandelions!

For a nut free vegan cashew cheese cake replace the base and filling with sunflower seeds. It’s advisable to soak the sunflower seeds for 8 hours to sprout.

What is Coconut Butter?

Coconut butter is the blocks of coconut that many health food shops sell. The brand I buy is raw and organic. It’s similar to coconut oil but it’s made from creaming the whole coconut and no fibre is extracted.

This means it’s not totally smooth but it works very well in raw vegan cheesecakes and is cheaper than coconut oil.

If you can’t get coconut butter then coconut oil or cacao butter work just as well.

This is called a mocha cake as it’s chocolate and coffee with a similar flavour to a Caffe mocha. It’s named after Mocha, Yemen the port city that was important for the coffee trade.