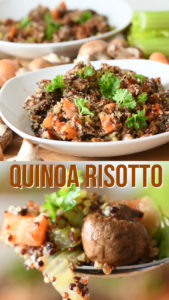 Easy to make healthy quinoa risotto that contains 3 portions of vegetables and a large amount of plant protein. This brothy flavoursome quinoa dish is just what you want on a cold day to warm you up from the inside. Quinoa risotto can be made in 20 minutes for a complete vegan protein meal.

I think this tastes so good as it has that umami quality from the mushrooms and seaweed. However as all this brothy taste just comes from natural unrefined sources you don’t have to worry about excitotoxins that are a concern with MSG.

Naturally free of dairy, grains, rice, oil and full of nutrients. Suitable for vegan, gluten free and paleo diets, more info about quinoa and paleo later in the article.

I’m not really a huge fan of celery; probably from the stringy texture. What celery does give a great taste to stocks and juices something is worthwhile adding is most savoury dishes.

For the quinoa risotto, I’ve cut each celery stem into 4 pieces lengthwise. Then quite finely sliced so there’s lots of little pieces celery but no stringiness.

You don’t have to use stock for this – the carrots, celery and onion do add that stocky taste along with nutrients. But some do like it quite strong.

Instead of stock I usually use a bit of yeast extract in water (about 1tbsp) to get that all important b12. Although organic carrots should contain some b12 as they haven’t been pressured washed.

Or instead of stock you could just add some salt or miso – after cooking so that no nutritional content is lost.

Seaweed is also optional in this quinoa mushroom risotto but it adds so much goodness and is a natural flavour enhancer. If you’re adding stock then theres less need for the seaweed.

The sea vegetables I used in this was a mixture of nori, dulse and sea lettuce. This adds fibre, protein, iron and iodine. I try to have a bit of sea vegetables every day – just a small amount goes a long way.

My quinoa risotto is free of any oil or butter. Lots will complain that I’m not frying the onion in olive oil but that’s a choice I’m making for health reasons.

Even healthy fats like olive oil turn harmful when heated so instead, I cook onions for a few minutes in a tiny bit of water and stop just before they burn and all the water has gone.

In the video for this quinoa recipe you don’t see this part as it wouldn’t perform well with this bit emphasised. If you miss that fatty taste try drizzling on some cold pressed oil after cooking.

Usually I just use normal white quinoa. However as I’m hoping to move house in a couple of months I’m running down supplies and have lots of Tricolour quinoa left so I’m using it for this quinoa risotto.

I do actually much prefer just white quinoa as the red and black quinoa are tougher. It’s similar to wild rice mixed with normal rice.

Use any type of mushroom that you like for this quinoa risotto. I used chestnut mushrooms just because they were on offer. Often I just use normal mushrooms although if I had more money I would like to experiment with using more exotic types.

There’s some debate about whether quinoa is paleo or not. Traditionally it has been said to not be paleo because it’s similar to a grain. However quinoa is high in nutrients and lower in lectins and phytates than seeds that are allowed on paleo so it’s logical to say quinoa is paleo.

As quinoa is technically a seed many say it is paleo, especially if soaked and sprouted before cooking. Ultimately it’s your choice and we’re all individuals, if it agrees with your body I would say go for it if it doesn’t then leave it out. Buckwheat is another good alternative to rice to make a risotto, this is also a seed that is nothing to do with wheat.